May I come in?

Many years ago President Ronald Reagan said he had 'developed a hobby' of 'collecting jokes that I can prove are told by the Soviet citizens among themselves, which show their great sense of humor, but also a certain cynicism about their system.' Many of you know I refer to a famous joke told by Ronald Reagan during his meeting with Gorbachev in Iceland how American and Soviet citizens argued about freedom in their countries. The American in the story said: "I can walk into the Oval Office, I can pound the president's desk, and I can say, Mr. President, I don't like the way you're running our country." And the Soviet citizen said: "I can do that." The American said: 'You can?' He says: "Yes. I can go into the Kremlin to the general secretary's office, I can pound his desk and say, Mr. General Secretary, I don't like the way President Reagan's running his country.''  Since I'm from the country, where Government only allowed to condemn American President and I became a citizen of the country, where I can vote for and criticize the same President, I decided to submit my thoughts about "go back" Presidential remarks, which have already created a lot of noise how narrow-minded our elected Leader is.

Knowing how Americans love classical approach to history, I would like to begin with a fact, that in June 1939 the M.S. St. Louis cruised off the coast of Miami with more than 900 Jewish passengers on it. After the decision of immigration authorities, the ship was sent back to Europe. Most of the ship’s 937 passengers were Jews trying to escape Nazi Germany. They did not hate Germany, they never hated America either, and for many on the St. Louis, that rejection was a death sentence. Do we repeat our mistakes? 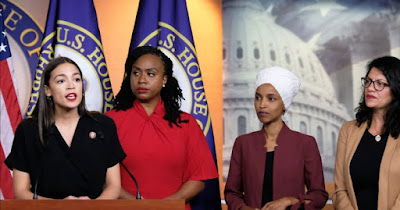 Being a loyal Internet user, I decided to research about 4 women of color offered to go back and... three out of four were born on American soil. According to U.S. Citizenship and Immigration Services, "To become a citizen at birth, you must have been born in the United States or had a parent or parents who were citizens at the time of your birth".  Are we changing our rules discriminating inflexible citizens for certain leaders? Dear President, may I remind you, your daughter Ivanka became a Jew just because of her wish to get married to a Jewish man and might or already faced a real hatred in many ways, and she has no country to go back.

I have a country to go back to. Yes, I'm from Ukraine.  Despite of the unusual result of Presidential Elections there, many Jewish leaders have already expressed their concerns about possible pogroms soon. Mr. President, I voted for you and before you will send me back to vanish in pogroms, I would like to get a chance to come to Oval Office, pound your desk, and say: "Mr. President, I don't like the way you're running our country."  May I come in?

Posted by Alla Staroseletskaya at 9:53 AM